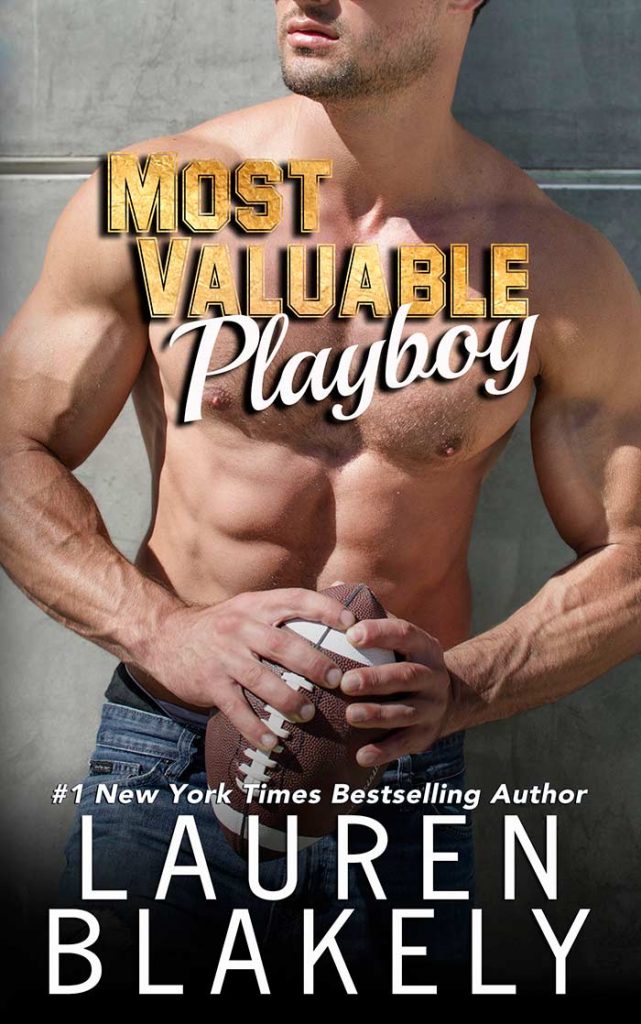 So funny story…normally I don’t have two cover reveals within a week of each other, but THE KNOCKED UP PLAN was done knocking around in my head and Ryder insisted that his cover had to be shared ASAP! What a hot cover it was, right? Now we change gears and I bring you MOST VALUABLE PLAYBOY! It’s my new steamy sports romance and will be coming to all your favorite retailers on September 1st (iBooks users will be able to get this title two days early on Aug 30)!

Thanks to Scoot Hoover for the amazing photo, and Helen Williams for another outstanding cover design!

This story will be smoking up e-readers when the MOST VALUABLE PLAYBOY gets into a bit of a mess after he decides to enlist his best friend’s little sister to play pretend girlfriend.

Hands down, my favorite thing in the world is to score. Touchdowns.

Don’t let the fact that I’m the leading pick in the Most Valuable Playboy charity auction fool you. These days, I’m only a player on the field. I’ve kept my pants zipped all season long — and it has been long — because nothing’s more important than leading my team to victory every week. Except maybe escaping from the owner’s handsy-as-hell sister who seems dead set on winning more than a date with me at the auction.

She’s my best friend’s sister with a smile as sweet as cherry pie and a mind that runs quicker than the 40-yard-dash. After Violet saves the day with the highest bid, I don’t even give her a two-minute warning before I kiss her in front of the whole crowd and then announce that she’s my girlfriend. Which would be fine except my agent tells me the next day that we’ve got to keep up the act while he’s negotiating my contract.Violet says she’ll take one for the team and pretend to be mine, but our boyfriend-girlfriend scrimmage quickly turns into a full contact sport. And soon enough, I want this game with her to go into overtime. The problem is — I’ve been riding the bench for years.

How can a guy like me, who finally has a chance to prove his worth on the field, convince the girl she’s most valuable to his heart?

* MOST VALUABLE PLAYBOY is a brand new standalone sports romance written in the guy’s POV!*

Release date: September 1.
Please note, MOST VALUABLE PLAYBOY will release two days early on iBooks! If you’re an iBooks user, you can enjoy this sports romance on August 30!