Once upon a time, five years ago, a writer sent out her 107,000 word manuscript to several fancypants New York literary agencies in the quest to find an agent for Trophy Husband. Lo and behold! One of those agents called her! At 7 a.m. in the morning! After reading the first two chapters! And said he wanted to represent it, and thought it could be the next First Wives Club. The writer was thrilled because this agent was and is A VERY BIG DEAL. As in a powerhouse in publishing who represents a lot of big deal authors. The writer was shocked, but very happy. Before she hung up, she said, “So you’re my agent now?” He laughed jovially and said, “I’m your agent now.” The writer did a tap dance. Or some dorky equivalent. She’d landed not just an agent, but a true superstar. One week later, he called and said “You know, if you made the heroine to be a rich older woman whose husband is a college professor I might like this. But I don’t want to represent this after all.”
Oh.
Bummer.
The writer eventually found another agent for the book, but the book never went on submission because the economy tanked. Then various things happened over the next few years, until earlier this year when the the writer decided, “Hmm, I liked that story. What if I revised it significantly and published it myself?”
And it became a USA Today Bestseller yesterday. 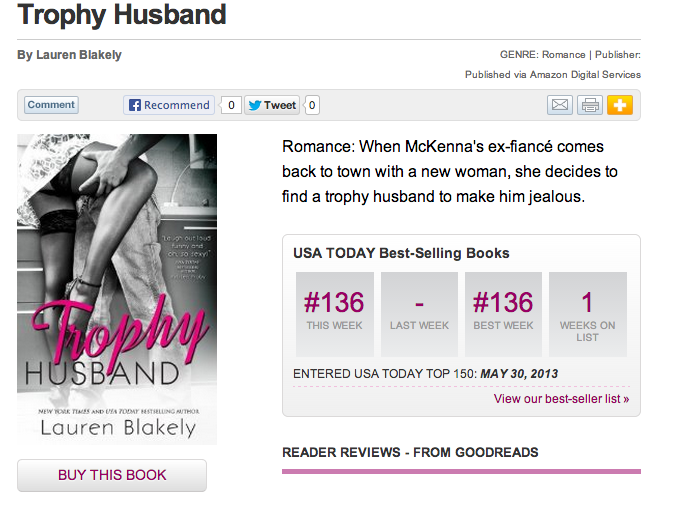 So why am I telling you this? Perhaps the agent was right. Because the story did need changes. HUGE changes. But the reason I’m telling you this is to remind you DON’T GIVE UP. I believed in this book. I kept trying to find a way to give it life. But it wasn’t until after I self-pubbed Caught Up In Us and Pretending He’s Mine that I really knew and understood what Trophy Husband needed.
In its first incarnation, Trophy Husband was a sprawling, anthemic, strident piece of mommy lit. In the original version, McKenna had a different name and she was nearing 40 and she was a mom of three, and she was a mommy blogger rather than a fashion blogger. When her husband married a trophy wife, she did, in fact, embark on the Trophy Husband quest, but her quest was not only about proving a point it also became part of a series of “mommy wars.”
But that wasn’t the story I wanted to tell five years later. I wanted to tell a story about love, and romance, and sweetness, and sexiness. I wanted to tell a story that didn’t involve divorce, or custody of children, or affairs. I didn’t want to tell a story about moms not getting along or women not getting along. (By the way, I’m happily married and have been for 15 years. The book is fiction!)
I wanted to tell a story about finding love again when you’ve been hurt. About finding the person you can’t help falling in love with. So that original novel that Big Shot Agent repped for a week then stopped repping gave itself to the book I released two weeks ago. Some of the scenes, dialogue and banter remained intact. For instance, Dave Dybdahl and Steely Dan Duran were always in the story. The Guitar Hero scene and the video game store and the French Fry lunch were always in the story. The karaoke scene was always there. And the Helen scene too.
So Trophy Husband is a very different book. It’s a revised book. It’s a changed book. But it’s also the book I wrote five years ago that was repped and not repped and then never went on submission. It’s the book a big shot agent wanted and then didn’t want. And thanks to amazing readers and passionate bloggers and word of mouth and a great publicist in Inkslinger PR, it found a home.
If you’re a writer or artist or dreamer – just know that things might not fall into place immediately. They might take many unexpected twists and turns along the road. They might take five years. But if you believe in yourself and you do the work, they just might take you to exactly where you were meant to be…
xoxo
Lauren

Pre-Order EVERY SECOND WITH YOU!