All About the Overnight Service Audiobook 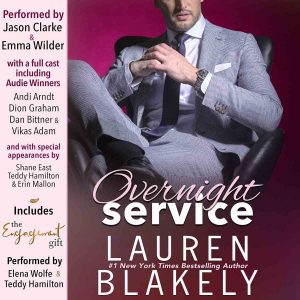 A LETTER TO MY LISTENERS!

I’m so thrilled to reveal the cast for OVERNIGHT SERVICE and bring nine rock star narrators together to tell the fiery, passionate, and witty enemies-to-lovers romance of two rivals (and once upon a time lovers) who fall in love while competing for the same client.

OVERNIGHT SERVICE will be performed by Jason Clarke and Emma Wilder with a full cast including Audie winners Andi Arndt, Dion Graham, Vikas Adam and Dan Bittner, and with special performances by Shane East, Teddy Hamilton and Erin Mallon.

Jason Clarke has quickly risen up as a star in his own right, and listeners have embraced his varied and nuanced performances, along with his wit and vulnerability, as well as that sexy alpha voice. Emma Wilder has a natural sultriness to her voice, and a depth of emotions that’s perfect for this heroine, created with her in mind.

In addition to the two talented leads, this audiobook includes the voice of my frequent collaborator Andi Arndt, who will be playing six different characters, flexing her acting and vocal muscles!

I’m delighted, too, for the return of Dion Graham, who starred in my first multicast — BIRTHDAY SUIT. In OVERNIGHT SERVICE, he plays two main supporting characters who both have romantic subplots, so listeners will get to hear this sexy-voiced man in romantic roles! And I can’t wait for my listeners to hear Dan Bittner for the first time on one of my books. I was so blown away by his Audie-winning performance as a reporter in Courtney Summers’ SADIE, as well as his passionate performance in Gayle Forman’s utterly fantastic WHERE SHE WENT, that I knew I simply had to have him in one of my books. His character also has a romantic subplot, so get ready to hear another sexy guy!

Finally, I’m over the moon that Vikas Adam has returned to play two roles in this audiobook, including a hilarious recurring character he’s also playing in INSTANT GRATIFICATION. The man has such range!

Rounding out the cast are the always fantastic Shane East who brings that charming British voice to the book, and the delicious Teddy Hamilton (in his first audio for me), as well as fan favorite Erin Mallon, who’ll be playing a few unconventional roles. In fact, many of Erin’s fans say how much they love her male voice as well as her female voice, so I’ve cast her in 4 roles where she’ll be playing two women and two men!

Don’t miss OVERNIGHT SERVICE. Your ears will be very happy!